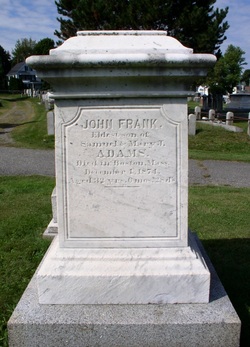 John's father Samuel was a lumber merchant, owner of "Samuel Adams + Co." on Daniel St in Portsmouth. The 1870 census has John F. working as a clerk on the Navy Yard. In same census, John and his dau Helen are living with his parents, though wife Eva is not here. She may be the Eva Adams age 24 b.ME, a saleswoman, living in Boston at this time.