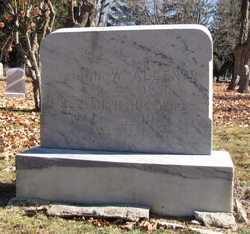 While living in Cornish as a teen, he worked as a farmer [1850 census], but was a machinist during the years he was in Biddeford. He was likely not an actual resident of Dayton when he enlisted, but was one of several Biddeford volunteers who filled the Dayton quota.

John and Keziah had 8 children [1900 census], all born in Biddeford:

(plus 2 children who died as infants, buried with their parents in Greenwood Cem)