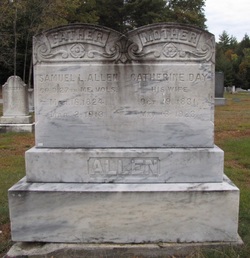 In early census records (1850 Somersworth and 1860 Lynn, MA), Samuel (usually called Leighton) was a shoemaker (cordwainer), but was afterwards a farmer. He lived most of his life in Shapleigh, except for the above mentioned censuses where he traveled outside the state for shoe working. I don't see him at all in Berwick, the place of residence given during enlistment, so perhaps his service was credited to this town to fill their quota.

The obituary of Samuel was carried in the Springvale Advocate, issue dated Friday 7 Mar, 1913 (pg 3), in part:
Sam'l L Allen died at home of his daughter Mrs Charles Rowell at Emery Mills on Sunday afternoon at advanced age of 89 years. Born in Shapleigh, was one of a large family of 14 children. At 11 years of age he plunged into work of a farmers boy. At one time he was a shoe maker, but more of his life has been upon the farm. Besides wife who survives him, there is dau Mrs Charles Rowell; 2 sisters and brother.

Samuel's brother George H served as corporal in Co F of the 17th ME Inf, from Aug 1862 until May, 1864, when he was mortally wounded in the Wilderness.

Samuel and Catherine had only one child: