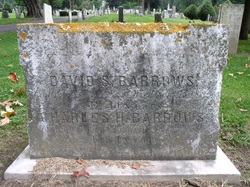 David did not marry.

David is seen as an operative in a mill on the 1860 Saco census, living with parents David and Abigail at age 21. He was a machinist in 1866 Saco [St Dir], living on Portland Road, and was a cotton mill worker in 1880 census, living with his father, sister, and brother Charles (with whom he shares a gravestone). At the time this census was taken in June, David was already sick with a bilious fever. Biddeford's The Union and Journal newspaper, dated Friday, 17 Sept 1880, had the following:
Capt David Barrows died of consumption at the home of his father Tuesday night.