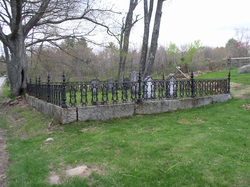 Bedell Family Plot in South Berwick
JAMES A BEDELL was born on 10 Apr 1839 in Wells, Maine [VR of Wells, pg 393], the son of Silas and Almira (Allen) Bedell. He died from diphtheria on 20 Dec. 1862, while the regiment was on picket duty south of Hunting Creek, VA. He was sent home and buried in the Bedell family plot on Ogunquit Rd in S.Berwick.

Following the 1840 census, he moved with his family from Wells to South Berwick. James was a farmer there, living with his parents in 1860. 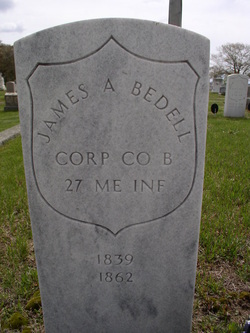 The Soldiers Monument in Wells, "In memory of the brave and patriotic soldiers of Wells who sacrificed their lives..." mentions James A Bedell, and a new veteran (cenotaph) stone stands in Ocean View Cemetery.