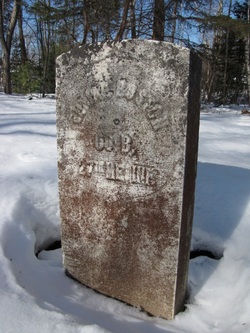 Rollinsford's Old Town Cemetery
ELIJAH BOSTON was born circa 1824-1825 [based on census and enlistment ages] in North Berwick, Maine [Descriptive roll; death and marr rec's of children all say South Berwick], his parentage not yet known. He died on 28 Feb 1882 [Veteran stone application], possibly in Rollinsford, NH where he was living [1880 census], and is buried there in the Old Town Cemetery.

In 1850 census, Elijah was living in York, Maine, working as a farmer, and living in household of Olive Grow. By 1860, he was in North Berwick and occupied as a farm laborer. His whereabouts in 1870 are not yet known, but he was in Rollinsford, Strafford, NH by 1880, a laborer, though census record says he was age 50 and was single.

The regimental reports show that Elijah deserted from Portland five days after being mustered in. If so, it is unknown how a veteran stone was supplied for his grave (unless mistaken for other Elijah of Company B).