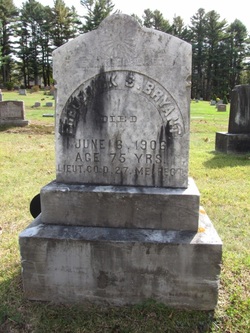 Fred was married a third time, to ANNIE J HOGAN, probably in 1875 [MA vr lists the marriage date as 12 Oct 1895 in Brookline, MA, but is surely an error]. She was born in St Johns, Newfoundland circa 1855 [per census recs], and was alive in 1920 census, living with son Horace in Somerville, MA.

While living in Kennebunk, Frederick was a jeweller and watchmaker [1850-60 censuses]. He moved to Massachusetts following the war, living in Chelsea, Boston, and Cambridge. He was listed as a carriage maker in the 1880 census, and as a joiner in 1900. He returned to Maine prior to his death, and lived in Sanford. He was staying at the Old Falls resort in Kennebunk when he died. He was a member of the William Reed Post, GAR, of Sanford, a former commander and was the current chaplain of the post when he passed away. In his obituary, it says he was survived by his wife and seven sons and daughters. Of the nine listed below, only six were alive in 1906. I may still be missing one (note: the 1900 census shows Annie having 7 ch, 4 still alive, while the 1910 census says ch: 6/3)