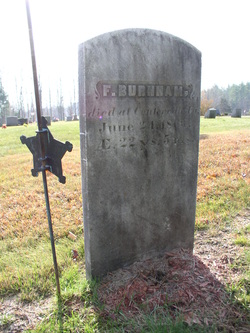 FREEMAN BURNHAM, born about January 1841, is seen in the 1850 and 1860 Hollis censuses with family of Eleazer and Sophia Burnham, and is also buried in same plot as them, so suspect that they are his parents. He died in Centerville, Virginia on 24 June 1863 from camp fever, aged 22 yrs, 5 mos [pension papers; gravestone]. He was buried in the Meeting House Cemetery at Hollis, Maine.

He married in Buxton, Maine on 23 Feb 1862 to MARZELLA E HODGDON [pension papers]. She was born ca Jan 1845, perhaps the daughter of Rev James Madison Hodgdon and wife Maria Stockbridge Bunker, both of whom she is buried alongside in the Bedell Cemetery in South Berwick. She had died on 14 July 1868 aged 23 yrs, 7 mos, 12 das. Also in this same plot are James A Bedell (who also served in the 27th ME but died early) and Silas and Almira Bedell.

They had one child: