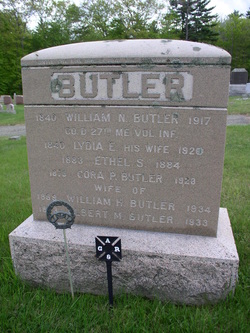 William worked as a farmer while living in Berwick, seen here through the 1870 census. After his move to South Berwick circa 1872, he went to work at the David Cummings Co shoe shop, employed as a cutter there for 38 years until a hand injury brought on his retirement. He was a member of C.W. Sawyer Post, No 18, GAR, and of the Olive Branch Lodge, No28, I.O.O.F. of S. Berwick. He was a member of South Berwick's Baptist Church [obit].

The ancestry of William and his wife, a distant cousin of his, can be found in Thomas Butler and His Descendants by George H Butler, MD.

iv. ALBERT M BUTLER [middle initial N in Butler Gen], born 2 Aug 1873, probably in South Berwick. He was single in 1920, living with his mother in household of sister Grace Libby in South Berwick [census]. He died in 1933 [grave].