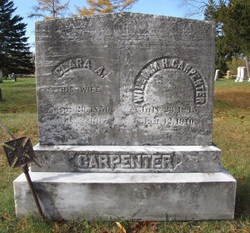 William lived early on in Berwick, then moved to South Berwick with his family, where he lived the rest of his life, except for a small time in Barrington, NH around the 1880 census with brother Henry. He worked in the woolen manufacturing business.

Note: His middle initial "H" is seen on his Civil War enlistment, as well as on his grave, but the 1890 Veterans Schedule and the 1900 census both have a "D" instead. The other census records don't give him any middle name or initials.

William and Clara didn't seem to have any children of their own, but in the 1900 census a JOSIE M is called 'daughter' to them, born Dec, 1879 in NH, parents given same birth place (she is not with them in 1880). In 1910, Clara has with her Harlan H Wilson, age 1, an adopted grandson, born in ME with parents born PA/NH. This would match the Josie M born 21 Dec, 1879 died 29 Oct, 1960, the wife of William N Wilson, who was born in Philadelphia (1910 census). They lived and were buried in Sanford, ME. The same census doesn't give her any number of children. I will need to look up her obit for further information.

[based on birth date from grave and age on census records, he was likely only 17 when he enlisted]