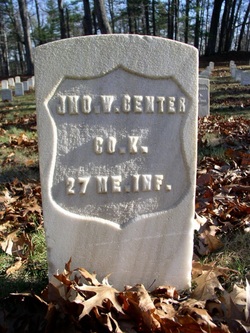 JOHN W CENTER was born circa Dec 1846 in Biddeford, Maine [Soldiers Home file; 1900 census], the son of Nathan D and Abigail Ann (Bickford) Center. John died on 13 Feb 1910 at the National Home for Disabled Volunteer Soldiers in Togus (Chelsea), Kennebec, ME. He is buried in their cemetery, section A, plot 2667.

Though the previous marriage is still unclear as of this writing, he did marry on 9 Jan 1900 [ME Marriages] to EMILY H (COLE) MILLER, herself previously married. She was born ca 1850 in New York, the daughter of Ambrose and Mary (Strickland) Cole. She died after the 1910 census, which shows her having returned to Manhatten, living with a daughter. She had two sons from her first marriage (John A and William Miller) living with them in 1900 Gardiner.

Nathan(iel) D Center, John's father, was a methodist minister, and was appointed to many churches throughout Maine. He was the son of Isaac Senter and Sarah Kilgore, born 1822 in Sweden, ME and died 28 July 1907 in Westbrook, ME. He is buried in Biddeford's Greenwood Cemetery [YCCI p247] with wives Abby Ann Bickford, who died in 1869, and Mehetabel (Mehitable) K Chandler, who died in 1909, along with several young children who died between 1850-1861. John was living with him in 1860 Newfield, and Nathan was afterwards appointed minister of the church in York, Maine [History of York, ME Vol II: Later Church Organizations - Methodists, list of ministers, p173], the town given as residence of John when he enlisted. Nathan later went to Poland, Androscoggin, ME [1870 census], Freeport [12 May 1875 Daily Kennebec Journal: Methodist Appointment Conference], and Waterford, Oxford, ME [1880 census].

By 1894, John was in Wisconsin, where he filed for his pension on 3 Oct, 1894 [app #1,161,201 cert #893,596]. He was in Wauwatosa, Milwaukee, WI during their 1895 state census (taken 20 June), and was admitted during this time into Milwaukee's Northwestern branch of the Nat'l home for Disabled Volunteer Soldiers for paralysis, age 50. He returned to Maine prior to 1900, and was living in Gardiner, Kennebec County when he married in Jan,1900 and there for the June census of that year. This record lists him as married "14 years", but it had taken place only 6 months prior. This number may be referring to a prior marriage being 14 years long.