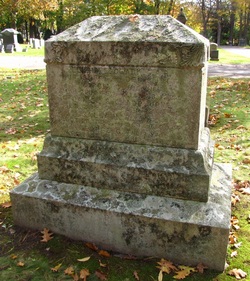 ELISHA EDWARD CLARK, born 15 Aug 1844 [gravestone] in Effingham, NH [death rec] or Limerick, ME [Descriptive roll], the son of Elisha S and Elizabeth G (Stover) Clark. His father was a school teacher and insurance agent in Limerick before removing to Naples, Cumberland Co, ME where he was a farmer. Elisha died on 2 Dec 1904 in Biddeford, Maine [ME VR] and is buried in Laurel Hill Cemetery, Saco, ME with wife and her parents.

He married around 1870 [30 yrs in 1900 census] to MARCIA ANN CHADBOURNE, the daughter of Daniel S and Sarah Chadbourne. According to grave stone, she was born 26 May 1846 and died 13 Jan 1934. She is seen with parents in the 1850 and '60 Waterboro(ugh) censuses. Mother Sarah was living with Elisha and Marcia in 1900, a widow at age 78, her daughter being only child that lived into adulthood. After death of her husband, I cannot find her in census records.

The census records vary as to whether Elisha was born in ME or NH. He lived in Limerick when young, and was a school teacher by age 18 [enl recs, 27th ME Inf and 2nd ME Cav]. He afterwards [before 1870] removed to Biddeford where he was a dealer in dry goods and was the town's postmaster for some time.

After serving his time in the 27th Maine Infantry, he reenlisted 1 Dec 1863 as a sergeant into Company L of the 2nd Maine Cavalry, at age 19. He was involved in the Battle of Marianna, FL on 27 Sept 1864 where he was shot in his left side and back and then taken prisoner, where he was shipped off to Andersonville prison in Georgia. Around 15 Jan 1865, he was released, and on 31 July he was discharged from his regiment.

Elisha and Marcia did not have any children.