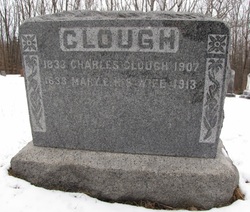 Charles was, in the 1860 census, listed as a farm laborer, but afterwards his occupation is given as a carpenter, ship carpenter (shipwright). The couple moved to Medford, Massachusetts soon after marriage, where a son was born, returning to Maine for a time before going to Vermont around 1859. The family moved back to Kittery in 1862, the year that Charles enlisted into the 27th Maine.

Old Kittery, pg 400, mentions this couple having 9 children. The 1900 and 1910 censuses confirm this number (7 said to be alive in former, 6 in latter rec):
NOTE: Research still needs to be done on the children of this couple, some data missing at this time: