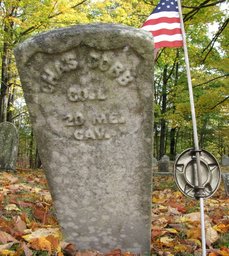 CHARLES COBB, the son of William and Lurinda (Gilpatrick) Cobb, was born in Limington, Maine on 25 Apr 1838 [Hist of Limington, pg 160]. He died in Limerick, Maine on 30 Dec 1869, aged 31 years, from "marasmus" (severe undernourishment) [Mort Sch]. He is buried in the Baptist-Hillside Cemetery, Limerick. He never married.

According to the "History of Limington", William Cobb "went to Limerick with his mother in 1846", so I would say that Charles accompanied his parents on the move. For a time, he lived with his uncle Samuel Gilpatrick, a farmer in Limerick.