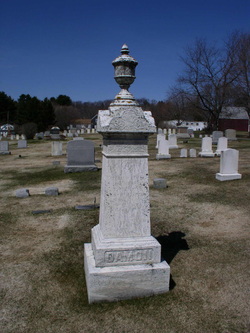 He was married in Portsmouth, NH, on 21 Feb 1864 [NH Marr Rec] to ANNIE MARY KEEN, the daughter of Josiah and Mary Ann (Lydston) Keen. She was born in Kittery on 23 Nov 1845, and died there on 12 July 1911 [ME death rec]. She was buried in Eliot's Mt Pleasant Cemetery, where her parents are also interred. Two of her brothers, Hamden C and Josiah E Keen, had also served in the 27th Maine.

A teamster at the time of his enlistment in 1862, with his residence listed as Baring, Washington, Maine, it is not known by me the circumstances on how he was in York County and filled the quota for Eliot. Both he and William T Carr were from northern Maine, the descriptive roll listing both of them as being born in Carroll, Penobscot, Maine (though it seems to be an error for Damon). Carr was a lumberman in Carroll (this town is about 50 miles from Baring with today's road system) - were they working together and had been in the area when the call for volunteers took place?

Following his service with the 27th Maine, George would reenlistment on 29 Feb 1864 (8 days after his marriage), when his former colonel raised a new regiment. He would be appointed a 2nd Sergeant and mustered into Co K, 32nd Maine Infantry, on 6 May 1864. During the Battle of the Crater at Petersburg, VA on 30 July 1864, he and over sixty others from his regiment were taken prisoner on Cemetery Hill. He was later exchanged, prior to 3 Oct '64, when he is listed as a paroled prisoner at Annapolis, Maryland. Though he was supposed to be discharged on 1 Dec 1864, when the remaining men of the 32nd ME were consolidated with the 31st Maine (their companies already having officers, the ones from the 32nd were mustered out), records show he served until 19 May 1865 (or perhaps 8 Aug, a date listed on the muster out record).

He lived the rest of his life in Kittery, Maine, working first as a watchman on the Navy Yard, and later seen as a baggage master for the railroad. His obituary [Ports. Herald, 2/28/14] said he was employed by the Boston and Maine RR, working at the Kittery Junction depot, and tended to the draw bridge. He was injured on the job there in Oct 1909 while operating the bridge for a passing tug, a line having come loose and dropping one end of the draw into the river. The force of this sent the handle of the hoisting apparatus backwards into Mr Damon and seriously injured him. He retired soon after, with nearly 25 years employed with the B & M RR. He was spending the winter at the house of his daughter, Mrs M. Gertrude Cutter of Dover, NH, when he passed away.