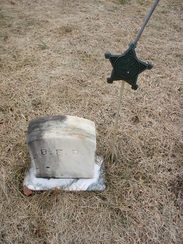 BENJAMIN F DAVIS was the son of Richard and Mary Ann (Furbush) Davis, born about Sept 1829 (based on age at death) in South Berwick, Maine. He died on 24 Dec 1862 at Camp Vermont, VA, his body returned home to be buried in the Portland Street Cemetery in South Berwick.

At the time of his enlistment, he was employed with his father as a tin plate worker. He signed up as a wagoner and, once the regiment was encamped in Virginia, went to work gathering timber for the construction of winter quarters. While in Camp Vermont (south of Alexandria, VA, in Fairfax County), he was admitted to the regimental hospital, dying there from "organic disease of the heart" on Christmas Eve, 1862.