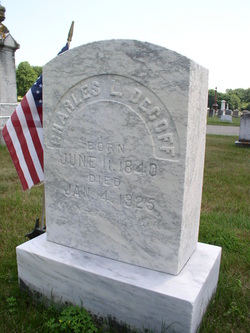 Naturalization papers claim that Charles arrived in Portsmouth, NH in the spring of 1845. I found on the Boston Passenger Lists a Charles DeCoff age 13 who arrived in Boston on 5 June, 1852 aboard the Sch. Mary Virgin, who sailed from Pictou, Nova Scotia. He was with a Jane DeCoff, age 37 and 4 others, said to be from Cape Breton, and looks to be his family. He was naturalized on 9 Sept 1892 in Portland, Maine.

He was in Boston for the 1860 census, a tool maker. He was back in Eliot for his enlistment, but returned to Boston after the war. Most rec's give him an occupation of machinist until his later years where he had a farm. He was in Boston for 1870, stayed a short time in Taunton, MA, moved back to Eliot for awhile before going up to Portland to work on the railroad, but returned to Eliot and lived out the rest of his life there.

He only had children by his first wife Sarah:

iv. (our baby), small grave in DeCoff cemetery plot gives no indication of name, date, or parents, but believed to be a child of Charles and Sarah.

I see no evidence of any other children that survived, only two of the above seen in census records.