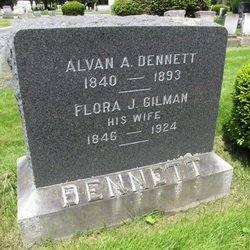 He married, on 22 May 1872 in Portland, Maine [ME vr], to FLORA J GILMAN. She was born in Bath, Maine on 18 Apr 1846 [obit], the daughter of John Taylor Gilman, founder of the Portland Press newspaper, and Hannah C (McKenney). She died on 14 Nov 1924 at Portland's St Barnabus Hospital, and is buried in Laurel Hill with her husband. At the time of her death, she had been a resident of Old Orchard for 30 years, most of them residing at her home on Washington Ave [obit, Bidd Wkly Jrnl, 14 Nov 1924].

A farmer while young, he attended the local schools in Buxton and later went to Westbrook seminary. Following his return from the war, he moved to Portland, Maine and began working for his brother L B Dennett's law office. In 1867, he was admitted to the Cumberland County bar and was a partner with his brother until 1871, when he joined the office of the clerk of court. He served as deputy clerk until 1879, when he was elected as the Clerk of Courts. He remained there until 1883, and did not seek a renomination. By 1886 [St Dir], they had moved to Old Orchard Beach, and Alvan worked in the insurance business in Saco, until retiring due to ill health. His obituary was carried in the Biddeford Weekly Journal, dated 7 July 1893.

II. GRACE GILMAN DENNETT, b. 22 June 1878 in Portland [ME birth rec]; d. 1958 [grave]. She was married to WILLIAM J C MILLIKEN, the son of Benjamin and Matilda Milliken, on 7 Oct 1899 in Old Orchard [ME Marr rec]. He was born in Old Orchard in 1862; died in 1948 [grave]. They are buried with her parents at Laurel Hill Cem. William and his brother owned the Milliken Ice Co of Old Orchard, delivering ice to homes and stores in Biddeford, Saco and Old Orchard. He retired by 1940, though the company name continued on with another proprietor. Grace, in her elder years, was a librarian at the Old Orchard Library. They had one child:
1. Leon Griswold Milliken, b. 4 May 1905 in Old Orchard [ME birth rec]; died after 1940. He was a private school teacher, working in Tilton, NH [1940 census] and Kingston, RI [1941 Old Orch St Dir]. He didn't marry and is buried with parents in the Dennett plot, Laurel Hill Cemetery.