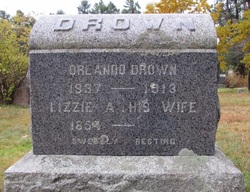 ORLANDO DROWN (Droun on muster rolls) was born in Kennebunk in 1837 [MA VR of children; YCCI, p919], the son of Oliver and Miranda (Gooch) Drown [2nd marr rec]. He died on 17 Mar 1913 in Haverhill, MA from heart disease [MA VR]. He was buried in Evergreen Cemetery in Kennebunk, ME, in plot already established for his children and first wife.

He secondly married LIZZIE A WEBBER in Dover, NH on 9 July 1881 in Dover, NH [NH VR]. She was born in Kennebunkport in 1854 [birth rec of son; YCCI, p919], the daughter of Leonard and Sarah Webber. There is no death date on stone, her name and birth year probably placed here at time of husband's burial, but not known if she is also interred in the Evergreen Cemetery plot alongside him.

Orlando was a ship carpenter during his time living in Kennebunk,ME, but following the death of wife Susan in 1874, moved to Haverhill, MA with son George and worked as a house carpenter there until his death. During the 1880 census of Haverhill, he was staying with his brother-in-law George Leach.

Orlando had three children, the first two by his 1st wife: