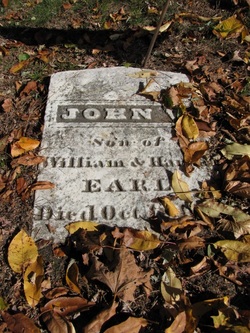 John W Earl Gravestone
JOHN W EARL (EARLE) was born in South Berwick, Maine about 27 Dec 1845 (based on age at death), the son of William and Hannah (Ramsdell) Earl. He died in South Berwick on 18 Oct 1862 while on furlough, aged 16 yrs, 9 mos, 21 days, the 27th Maine Regiment still encamped at Portland, Maine.

While the enlistment rolls say he was age 18, he was actually only 16 when he signed up to serve for nine months. He was a mill man, having worked several years and provided support for his family, as his father had lost his right arm some fifteen years earlier and was unable to work. Upon enlisting, he gave $140. of his bounty to his mother, and had planned to allot $8 of his 12 dollar monthly army pay towards her support. Unfortunately, he came down with a severe cold within three weeks of arriving at Camp Lincoln, and was given a brief furlough around the 8th of October to return home in the hope of getting better. Though under the special care of his mother and local doctors, he succumbed to the typhoid fever and died at his home.


Family notes:
William Earl (aka Earle and Hearl) Jr and Hannah Ramsdell were married on 3 Apr 1842 in South Berwick [VR of Berwick, South Berwick and North Berwick, pg 521]. William was the son of Edmund and Polly Earl, born 23 Apr 1816. Hannah may have been the daughter of Solomon Ramsdell, listed beside and sharing the same dwelling house number as the Earl's in the 1850 South Berwick census.