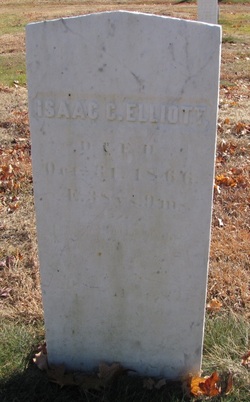 ISAAC ELLIOTT was perhaps born around January, 1828 [based on age at death] in Windsor, Nova Scotia [Descriptive Roll], to parents not yet known. He died in Saco, Maine on 31 Oct 1866 at age 38 yrs, 9 mos, from a lung disease he contracted around the 1st of Jan 1863 while stationed at Camp Casey, VA during his service in the 27th Maine [pension papers + g.s.]. He is buried in Woodlawn Cemetery, Biddeford [YCCI pg 199], called "Isaac C" on cem rec.

He married in Portland, Maine on 8 Feb 1852 [pension papers] to MARY MCDONALD, also said to have been born in Nova Scotia. An Elizabeth McDonald who died in 1854 at age 25 is buried in plot with Isaac, perhaps a sister of his wife. She filed for a widow's pension on 7 Aug, 1869, at the time living in Lewiston, ME. The 1870 census for this time has a Rachel Elliot aged 45 living here, born Nova Scotia, with 16-year old Samuel with her [he is a match to her one child, mentioned in pension papers]. Unclear if Rachel name is error, or part of her full name. Her whereabouts after the 1870 census is unknown at time.

Per his pension file, Isaac had but one child that survived him and was under the age of 16 when widow Mary filed papers. I see no evidence yet of any others that may have died prior to this, likely none born before Samuel as he was born 16 months after marriage took place: