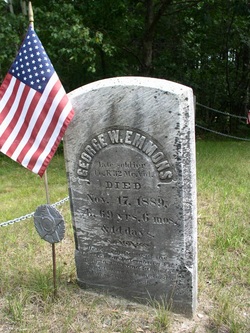 George married second, on 5 Sep 1866 in Lyman [pension papers], LUCINDA DAVIS, the daughter of Reuben and Agnes (Lord) Davis. She was born in Lyman on 1 Oct 1840 and died on 8 Nov 1917 in Lyman from a hemorrhage of the spinal cord [ME Death Rec]. She is buried with her husband.

George was a farmer and lived his life in Lyman, Maine, except for his time serving during the Civil War. In Sept 1862, he and his son George both enlisted into the 27th Maine Volunteers. A nine-month term, they were back home by the summer of 1863. The following year, on the 6th of May, George would this time accompany son Alonzo into service, signing up with the 32nd Maine Infantry. His son, however, took ill only two months in, and died in a Philadelphia hospital. Things didn't fare well for George that July either, when the 32nd participated in the seige of Petersburg, Virginia. During the Battle of the Crater, or Burnside's Mine, on 30 July 1864, the 32nd Maine was one of numerous regiments sent into the resulting disaster, where thousands of soldiers were caught up in the crater and in the trenches leading to the Confederate lines and Cemetery Hill, where the 32nd took many of its casualties. Forced in together, shoulder to shoulder, they were unable to fire their muskets, nor retreat while new troops pushed in from behind. Forced to surrender, George was one of the 1400 Union troops taken prisoner that day. His date of release is not currently known, but was possibly a pow through the conclusion of the war. In Dec, 1864, the 32nd being far below regiment strength, was disbanded and its remaining men transferred into the 31st Maine. This included those still being held as prisoners. George would be mustered out on 15 July 1865.

By his first wife Harriet, they had at least the following children: