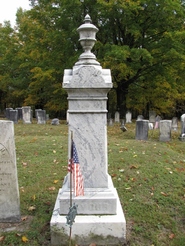 HORACE H FAVOUR was born in Limerick, Maine abt 3 July 1844 (based on age at death), the son of Stephen L and Harriet (Harmon) Favour. He died in Limerick on 13 Apr 1886 [grave; obit], and was buried in the Hillside Cemetery.

Horace, while young, worked as a farmer in Limerick. By 1880, he was employed as a horse car conductor, working in Boston. Not being at home for over a year was one reason for their divorce. When he came down ill, he returned to Limerick and lived with his brother Irvin, which was where he passed away. His obit was carried in the Biddeford Journal, 4/23/1886, pg 2.