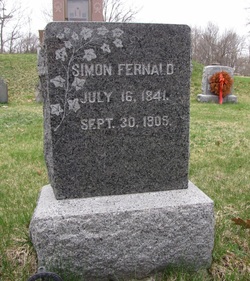 SIMON FERNALD was born 16 July 1841 in Kittery, ME, the son of Capt. Simon and Joanna F (Williams). He died on 30 Sept 1905 in Kittery and is buried in Orchard Grove Cemetery, Kittery, in same plot as parents [ancestry of his father is given in Old Kittery, pg 399+prior, as Capt Simon, Simon, Benjamin, Joseph, Benjamin, William, Renald].

Simon was a carpenter/joiner and lived in Kittery his entire life, save for his service in the 27th ME. His brother Warren served with him a brief time, a corporal in Co.G. Simon was one of those who volunteered to remain behind in Washington, DC and received the Medal of Honor (no fighting took place).

Simon and Mary (Duncan) only had two children, who are buried with them and their spouses in the Capt Simon Fernald plot. They were: