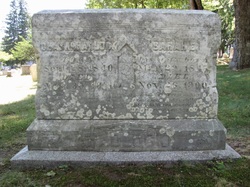 Charles Hadlock was a machinist in almost all records, save for the 1902 marriage and Stoughton street directory of same year, where it is said he was a store owner of C. H. Hadlock Co., selling crockery, glass ware and kitchen furnishings. If not for birth state, parents names and 2nd wife's name, I would suspect this being someone different. He lived in Saco, Old Orchard, and Biddeford, ME, as well as Stoughton, and Watertown, MA

Charles did not have any children with either wife.