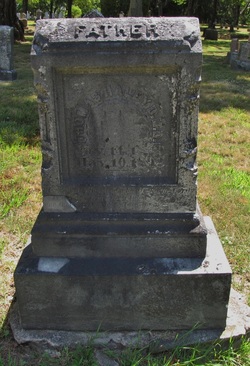 THOMAS HALEY, the son of Mark and Lydia Ann (Hill) Haley, was born in Saco, Maine on 14 Nov 1829 [grave]. He died in Biddeford, Maine on 10 May 1892, aged 62 yrs [ME Death Rec], and was buried there, in Greenwood Cemetery (stone is very dirty and hard to read in this photograph).

Thomas attended the Kimball Union Academy in Meriden, NH, graduating there in 1854. The following year, he began his dentistry studies with Dr Haskell of Biddeford, taking over his business in 1862. While in the 27th Maine, a fire in Biddeford destroyed the Union Block on 20 Dec, where Dr. Haley had his office. His equipment, stored away while he was serving, was lost in the flames ($1000 in property). After returning from the war, he resumed his practice. He continued his education at the Harvard Dental School, graduating in 1869. In 1871, he and Charles E Hussey formed a dentistry partnership, their office located on Main Street in Biddeford. In 1885, due to illness, he sold off his share and moved south. He soon returned, however, and began a new practice.

Thomas was a charter member, and at one time was president, of the Maine Dental Society. He was also a member of the Merrimac Valley Dental Association, having served as a vice-president. He also served in several other social organizations, such as the Palestine Lodge of Masons, the Odd Fellows, York County Good Templars, and the Biddeford-Saco Building Club [obit, Boston Herald, 5/11/1892; obit, Lewiston Evening Journal, 5/11/1892; The Dental Cosmos, Vol 34, pg 501-2].