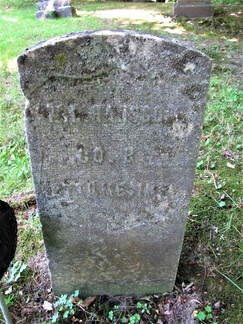 2013 - in the shade, very hard to photograph
WILLIAM LYMAN HANSCOM was born in Eliot, Maine about 1823 (based on age in censuses), his parentage not yet certain. He died, between 1880 and 1884, and is buried in the Free Will Baptist Church Cemetery in South Berwick, Maine.

He secondly married, on 25 Jan 1864 in South Berwick, to SARAH W NASON, perhaps the daughter of Lucius and Sarah W Nason. She was born in 1832 [grave] and died on 24 Nov 1884 [York County Probate]. She is buried in same plot as husband in South Berwick.

William was a carpenter (joiner), and lived in Eliot, Berwick, amd South Berwick, Maine, as well as Dover, NH.

The following children, based on census data, may not be complete:

[NATHANIEL HANSCOM, not w/ family in 1860 census, aged 11 in 1870 census. His name is written clearly on the latter census, though was originally marked as female, and written over with an "m". As "he" is not seen in earlier or later censuses, this was perhaps a mistaken entry for Mary, herself missing from the 1870 census (or at least not in this household)]