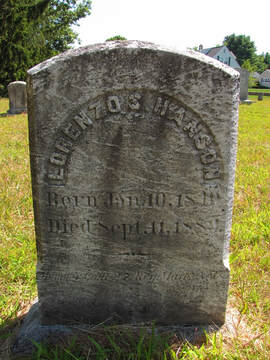 LORENZO SYLVANUS HANSON was born 10 Jan 1840 [gravestone] in North Berwick, Maine, the son of Stephen and Mindwell (Boston) Hanson. He died in Manchester, NH on 11 Sept 1889 of heart failure, aged 49 yrs, 8 mos, 1 day [NH VR] and was buried there in the Amoskeag Cemetery.

His occupation a farmer and a hostler (horse caretaker), he lived in North Berwick during his early years. In the 1870's he moved off first to Rhode Island (his elder son reportedly born there ca 1875) and later to Wisconsin, but came back to Maine by the 1880 census, found in Berwick. His stay was not long, as he then went to Pittsfield, NH (his youngest child born here), and finally settled in Manchester, NH only 4 years prior to his death. In the year of his death, he was living in a house on Chestnut St, on corner of Appleton [1889 Manch Dir].

He had the following children, first two by wife Clara: