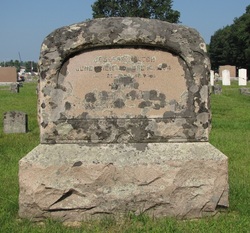 Hatch Gravestone, Ocean View Cem, Wells
JOSEPH EATON HATCH was born on 25 June 1818 in Wells, Maine [Wells VR, pg 223], the son of James and Grace (Eaton) Hatch. He died in Virginia on 2 Oct 1864, from wounds received during the Battle of Peeble's Farm a few days prior.

A year after his service ended with the 27th Maine, Joseph reenlisted as a substitute for Gilbert Patten of Bath, Maine, mustered in on 23 Aug 1864 at Lewiston, Maine, to serve for three years. Only a month later, during the Battle of Peeble's Farm on 30 Sept 1864, he was mortally wounded by a gun shot wound to the neck. Removed to the 5th Corps Hospital near Weldon Railroad, VA, he died there on 2 Oct 1864.

Joseph and Angeline perhaps only had one child together: