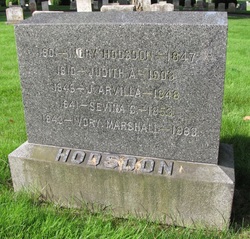 IVORY MARSHALL HODSDON, the son of Ivory and Judith Ann (Clark) Hodsdon, was born in Ossipee, NH [Descriptive Roll] in 1843. He died from diphtheria at Camp Casey, Virginia on 26 Jan 1863. A stone stands for him in Laurel Hill Cemetery, Saco, so his body was probably returned home for burial.

His father having died while he was young, Ivory became the main support for his mother when he came of age to work, his siblings being married and having families of their own. He worked as a clerk and salesman for Stephen S Mitchell, who ran an apothecary on Main St in Saco, and gave most of his wages to his mother, or paid a local grocer for groceries to be delivered to her.

Ivory originally was a private in Company A, having enrolled in Limerick as a substitute for (Jordan?) Libby before becoming the hospital steward. The muster-in roll says he was mustered in on 15 Oct and promoted on same (the pension file lists the 30th of Sept as his mustering in). Ivory first came down sick when the regiment moved into Camp Vermont in Dec '62. It only became worse following their move to Camp Casey, and surgeon John E L Kimball requested a furlough back home to recuperate. Unable to obtain one, he put in for Ivory's discharge for disability. The certificate was in the surgeon's hands (unbeknownst to Ivory), though the arrangements for his discharge was not yet completed when Hodsdon died.

His mother applied for a pension in 1866, and received a monthly payment until her death in 1903.