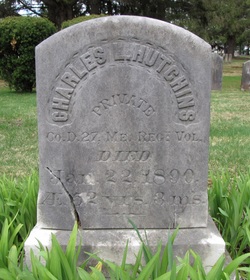 Charles L Hutchins grave
CHARLES L HUTCHINS, the son of Thatcher and Mary (Fletcher) Hutchins, was born in Kennebunkport, Maine about Oct 1837 (calc from age at death). He died at Cape Porpoise on 22 Jan 1890, aged 52 yrs, 3 mos [grave; Kennebunkport VR]. He was buried in Arundel Cemetery in Kennebunkport.

Listed as a sailor in the regiment's descriptive roll, he was listed as a mariner and fisherman in the Kennebunk censuses.

His obituary, published in the Biddeford Weekly Journal on Fri., 24 Jan 1890, had followed the news of both his father and son Howard having died the Sat. before, their funerals being held two days prior to Charles' death.