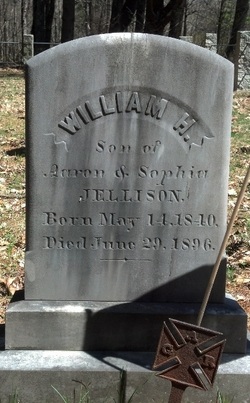 William and Katie had no known children. In her will, she bequeathed her property and household goods to her siblings, their wives, and her nephews.

While both he and his brother Joshua were listed as farmers in the descriptive rolls of the 27th Maine Infantry, they both moved from town and were engaged in other professions. By 1876, William had relocated to Petrolia, Pennsylvania, a newly established borough in Butler County, where oil had recently been discovered. There he became the proprietor of a hotel, with a saloon and restaurant [the Daily Derrick Newspaper, Oil City, PA, 5/26/1876 issue, reported on a fire at the "Jellison Hotel", owned by James Garsford and occupied by W H Jellison]. An 1892 newspaper note [Pittsburg Dispatch, 8/23/1892, pg 8] called his hotel the "Oriental House". His obituary said he was also engaged in the oil business there, though the specifics of his involvement with this is not yet known. In 1884, he served a term as a member of the town council [History of Butler Co: Petrolia Borough]. The 1892 Annual Report of the Us Patent Office (pg 187) shows William filing a patent for a "roofing-joint".

He was a member of the James Guthrie Campbell Post #107, GAR, organized in 1878 in Petrolia.