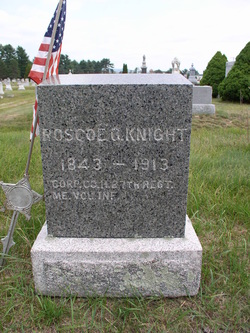 ROSCOE GREEN KNIGHT was born in Waterboro, Maine [death rec; Hamilton Gen, pg 337; Descriptive Roll says Cornish] on 30 Jan 1843, the son of Joshua and Almira (Hamilton) Knight. He died in Cornish, Maine on 23 Dec 1913, aged 70 yrs, 11 mos, from Brights Disease. He was buried alongside his parents in Riverside Cemetery, Cornish.

Shortly after the 1860 census, Roscoe moved from Cornish to Hiram, Maine, where he worked as a shoe manufacturer. It was from there he enlisted to serve with the 27th Maine, first as a private, and later was promoted to corporal. Following the war, he returned to Cornish, and took up the trade of harness maker, an occupation he kept for over 40 years.