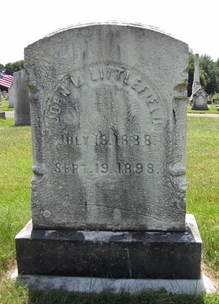 He was married, date not yet known, to ANNA AUGUSTA FRYE, the daughter of William and Hannah (Deering) Frye of Eliot. She was born in Portsmouth, NH on 2 Nov 1844 and died in Cornish, Maine on 7 Mar 1902 from a tumor, aged 57 yrs, 4 mos, 5 das. Following the death of her husband, Anna went to Cornish to live with her daughter.

Though seen in Eliot during the 1860 census, living with the Hill family as a farm laborer, his residence was listed as Wells when he and his brother Franklin Littlefield both enlisted with the 27th Maine on behalf of the quota of Eliot, Maine.

From the Portsmouth Herald, dated 30 Sept 1898 (pg 1):
John L Littlefield, a most estimable citizen of Eliot, died on Monday, aged 60 years. He leaves a widow and daughter, the latter the wife of Walter P Perkins, Esq, of Cornish, Maine.