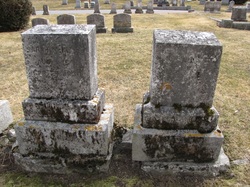 He married in Biddeford, ME on 5 Feb 1872 to SARAH (FRENCH) DAY, the daughter of Aaron and Catherine (Davis) French. She was born in Porter, ME on 1 Aug 1841 and died in Saco on 27 Feb 1930 [YCCI, p1495; Desc of Micam McIntire, p65]. She was buried with second husband [currently unclear who her spouse by surname Day was] in Laurel Hill Cem. She had lived with daughter at 23 Mechanic St in Saco until her death.

Henry lived over half of his life in Kennebunkport, staying with his father until at least the 1870 census, which listed him as a machinist. He afterwards removed to Saco, occupied there as a laborer. He was seen there during the 1890 census and veteran's schedule, where it is recorded he had kidney and liver trouble.

Henry and Sarah had two children:

I. CHARLES NORMAN MCINTIRE was born 4 June 1873 in Saco, Maine. He died on 4 Feb 1919 [ME VR] and was buried in father's plot at Laurel Hill [YCCI, p1495] He was an undertaker, working for Walter J Dennett in Biddeford,ME [WWI Draft Card], living in Saco with mother. He didn't marry.