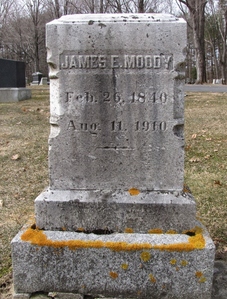 Born in Kennebunkport, James lived here in his early years, moving afterwards to Saco between the 1860 and 1870 censuses. He was more familiarly known in town as "Ed", driving a grocery team for J G Deering and later A G Prentiss. For some 30 years he was a member of the Saco Fire Department, driving the old Saco steamer for 18 or 20 years [obit]. He was a member of the city's U.V.U and GAR veteran organizations.

James and Ellen did not have any children together. She had a daughter Adelaide G Hanson born 6 July 1863, Addie shown as a "dau-in-law" to James in 1880 census. She is the Mrs George E Macomber listed as his daughter in his obituary [Bidd Wkly Jrnl, 12 Aug 1910, pg 8]. She died 20 July 1935, and is buried in the Moody plot in Laurel Hill Cemetery.