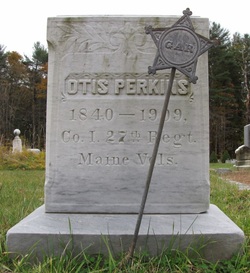 On 24 Jan 1874, in Kennebunk, Maine [Kenn vr], he was married to ALMIRA WEBBER. She was born in 1837 [grave] and died in 1924 [grave]. Her death record has not yet been viewed. She may have been the daughter of Shapleigh and Phebe Webber of Kennebunk, an Almira living with them in 1850 and 1860 Kennebunk censuses at the appropriate age.

Otis was seen in censuses living with his parents in Sanford to 1860, when he afterwards moved to Kennebunk. There he worked as a teamster for many years, a foreman at the Dane and Perkins Stable. He later did similar work for others in town, and was afterwards a section hand for the railroad [obit; 1900 census]. His house was located on Main St, West Kennebunk, a photo of him can be seen in the book Kennebunk (Images of America), page 110.

He and Almira (also seen as Elmira) only had one child, who died while young:

*Note: I did not find a birth record for Otis, nor a marriage record for father Henry (only he was listed on Otis' death record). Two other Perkins seen with Otis in the 1850 and 1860 censuses, Charles H and Hannah E , died in 1906 and 1905, respectively. While the former has his mother's maiden name as "Lajunett", his sister's record calls her "Linscott". Both Henry and Sally/Sarah were born in Sanford. More research is needed to find out his mother's maiden name.