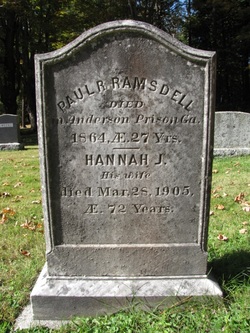 PAUL RICHMOND RAMSDELL was born circa 1836-7 in York, ME, the son of Jeremiah and Rhoda (Fitzgerald) Ramsdell. He died in 1864, date unconfirmed, while a prisoner at Andersonville Prison [YCCI, p2231], reportedly from diarrhea. Gravestone in York Village Cemetery is likely a cenotaph, as pension papers are not clear as to when and where he died, and seems to indicate his body was not recovered.

Paul was a farmer prior to entering the war, living in York. After his 9 month service with the 27th Maine Infantry was through, he reenlisted into Company K, 1st Maine Cavalry, on 25 Dec 1863, and was mustered in on 1 Jan '64. Two months later, he was captured during the famous Dahlgren's Raid on 2 March, sent first to Libby Prison in Richmond,VA (newspaper accounts mention prisoners from this battle were sent here) and afterwards to the newly opened Andersonville Prison, GA. Charles A Walker states in an affidavit "it was reported that he was at first confined at Libby Prison. Afterwards he was sent south and died". When other men of the 1st ME Cavalry were released from prison 7-8 months later during a prisoner exchange, they reported Paul's (or Richmond P's) death. His grave marker states he died there in 1864, aged 27 yrs. An online record of prisoners of war says "held at Andersonville and survived".

Paul and Hannah had three sons: