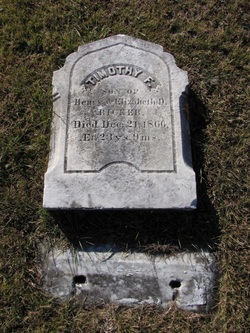 TIMOTHY F RICKER, the son of Henry and Elizabeth D (Chesley) Ricker, was born around Sept 1843 (based on age at death) in South Berwick, Maine [Descriptive Roll]. He died on 21 Dec 1866, aged 23 yrs, 9 mos [grave], and is buried in Woodlawn Cemetery, South Berwick.

He did not marry, and was employed as a farmer [Descriptive Roll].

In the Wentworth Genealogy, Volume 2 (pg 151-152), the parents of Henry Ricker were Stephen and Joanna (Wentworth) Ricker of South Berwick. Stephen was the son of Henry, who was the son of Reuben Ricker (a grandson of immigrant George Ricker).