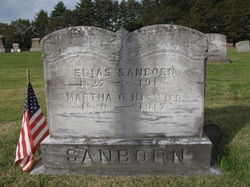 Elias came to Buxton around 1855 (he was a resident for 63 yrs at time of death), where he first worked as a carriage maker. Just prior to the Civil War, he took up farming, an occupation he kept until his death. It was noted in the obit of his grandson Justin Merrill in 1994 that this same dairy and beef-cattle farm was still in operation by the family.

III. ALICE LORANA SANBORN, b. in Buxton in 1868; died in 1954 [grave], and buried in Highland Cemetery. She was married, on 20 Oct 1900 in Buxton [ME Marr rec], to HARRIS NASON MERRILL. He was born in Buxton in 1872 [grave], the son of William J and Phebe S (Nason) Merrill. He died in 1926, and was buried in Highland Cemetery [grave]. He first worked as a machinist, but afterwards became a farmer on Elias's farm. They had one child:
1. Justin Sanborn Merrill, b. 21 Feb 1904 in Buxton [ME birth rec]. He died on 7 Dec 1994 in Portland, having moved to the Barron Center there the year prior, due to health reasons. He had been a dairy farmer, taking over the former Sanborn farm when his father passed away in 1926 [obit, Portland Press Herald, 12/8/1994]. He was married to Bessie R. Justin and Bessie are both buried in Highland Cemetery in the Sanborn plot. The 1940 Buxton census shows the couple with the following children (not traced further):
i. Marjorie I Merrill
ii. Roger R Merrill
iii. Verena B Merrill
iv. Justin S Merrill