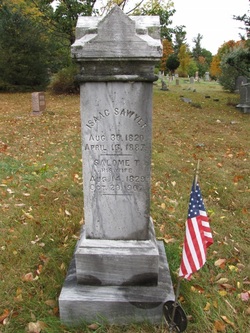 Isaac was a farmer, living in Limington, Maine during the 1860 census, and afterwards moved to Limerick [1870-80 censuses].

According to the Sawyer Families of New England, Isaac and Salome had the following four children. I did not locate the widow Salome in the 1900 census to confirm the number of children.