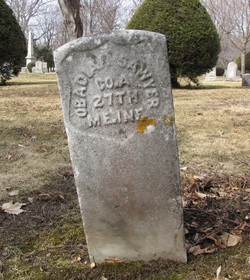 Obadiah Sawyer, Laurel Hill Cem, Saco
OBEDIAH (also spelled as OBADIAH) SAWYER was born about 1830 [based on age at enlistment] in Saco [Descriptive Roll]. He died on 16 June 1878 [Veteran Headstone Order], and was buried in Laurel Hill Cemetery, Saco, Maine.

He was married in Saco on 11 Oct 1862 [York County Marr Returns, Vol.3 pg 105] to SUSAN ELIZABETH (LIBBY) WELLS, the former wife of Charles Wells. She was born in Effingham, NH [son Charles Wells' death rec] about 1835 [based on age in census records], and died prior to Aug 1891 [daughter Eunice's marriage rec lists her as dec'd]. Her burial place is not yet known. Most records only called her Elizabeth.