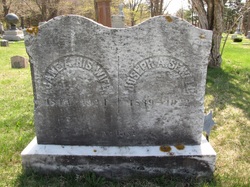 Though the 1900 census shows Jane having 5 children, one living, only one was ever seen in census records (and no gravestones to indicate young children buried w/ them):