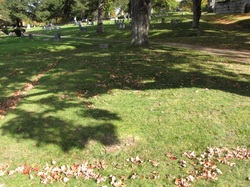 DANIEL SKILLINGS was born on 19 Oct 1848 [ME birth rec] in Portland, Maine [ME vr; Descriptive Roll], the son of Lothrop and Caroline (Hamblin) Skillings. He died on 29 Sept 1902 in Portland, Maine from pneumonia, aged 53 yrs [ME death rec]. He was buried in Evergreen Cemetery, Portland [Everg. Cem Recs].

Daniel enlisted on 10 Sept 1862 to serve as a drummer for the 27th Maine. He listed his age as 14, but he was still five days shy from his birthday when he was mustered in on 14 Oct, a musician being the only rank allowed to be filled by a minor. Following his service with the 27th ME, he reenlisted with the 30th Maine Infantry, as a drummer in Company I. He was 15 years old by this time, mustered in on 6 Jan 1864, and served until 20 Aug 1865.

After the war, he worked as a railroad brakeman, but was also listed as a musician in the Portland city directories, living with his mother. In 1882, he left for New York City, where he enlisted with the US Army on 22 March, to serve for 5 years with the 22nd Infantry. He was discharged on 26 March 1887 at Fort Lewis, Colorado [US Army Enlistments], and briefly returned to Portland, before moving back to New York. By 1899 he was back in Maine, as he was admitted to the Togus National Soldiers Home. He was dishonorably discharged from there in Dec 1900 for being "absent without leave for over 60 consecutive days" with clothes belonging to the home. He moved back to Portland, where he died two years later. He did not marry.

The Skillings lot in Evergreen Cemetery (Section N, Lot 495) has no stones, though not known if any had been erected in the past and are perhaps buried. The WPA project of the 1930's listed Daniel's plot as having no stone at that time, so there may have never been one. The records of the cemetery show Daniel lying in grave #1, while his mother (who died in 1896) is in grave #3. Grave #4 is "unk, poss Elias F Ripley" (not sure who that person is), while no name is listed for grave #2. Perhaps father Lothrop, the owner of the lot, is there?