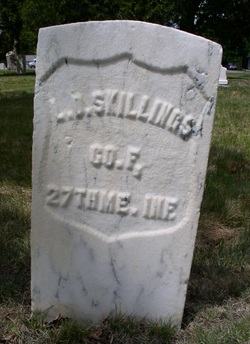 LORENZO DOW SKILLINGS was born on 26 Apr 1837 in Scarborough, Cumberland, ME [Descriptive Roll], the son of Josiah and Sarah (Libby) Skillings. He died on 8 Sept 1902 in Old Orchard, Maine, aged 65 years [obit]. He is buried in Woodlawn Cemetery, Biddeford, Maine [gravestone].

He was married first, on 1 Feb 1856 in Saco, Maine, to MEHITABLE JANE SCRIBNER, the daughter of Daniel and Hannah (Woodward) Scribner. She was born in 1835 in Waterboro, Maine [son's death rec] and died in 1866 [gravestone data]. She is buried in Woodlawn Cemetery, Biddeford, Maine.

Lorenzo was a house painter, and spent most of his life in Biddeford, Maine, except on a couple of occasions, where he is seen as a painter in other town directories, including Fall River, MA in 1873 (where his mother was living at same time) and Dover, NH before 1900.

He had two known children by his first wife: