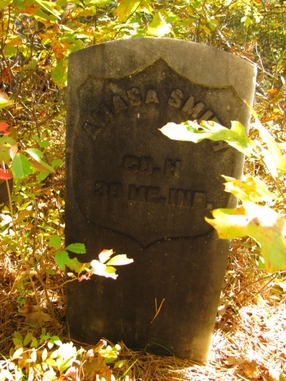 ​Amasa was a farmer at the time of his enlistment in 1862, and worked as such for most of his life. He also did day laborer work in Waterboro and Shapleigh. Besides his service with the 27th Maine, he had also reenlisted near the end of the war, and served in an unassigned company (from 4 Apr to 10 May 1865) with the 30th Maine Infantry. His military veteran gravestone shows only his service with the 30th Maine.

Below are two newspaper articles about Amasa's suicide. Note the differing accounts on who found the body and when. "Buff Plains" is the area now within the Waterboro Pine Barrens conservation land, which also extends into Shapleigh. Had he gone fishing in Pine Springs Lake, he may have still been on Shapleigh land, or if he went to the Buff Brook, he was in Waterboro. The Thing/Thyng Mill was located on the Buff Brook, and his father-in-law lived near there. This is where he was buried, in the family graveyard near the former mill.