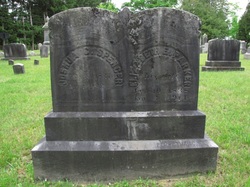 Joshua held many occupations, including that of a laborer, keeping a restaurant, being a carder, and as a lodging housekeeper. He lived early in Somersworth, NH [1850 census], moving to South Berwick by 1860, then to Fall River by the 1870 census. Here he lived for some 30 years, except for a time when he moved to Newport, RI around 1890, but later returned to Fall River. He and wife Lizzie moved next to Bridgton, Maine between 1905-1907 [Fall River St Dir]. He was admitted to the Togus Soldiers Home in 1916, and was discharged in 1923, removing to Dover, NH, where he died the following year. As the 1920 census shows him living in Rochester, NH, he must not have been a permanent inmate at the Veterans Home.