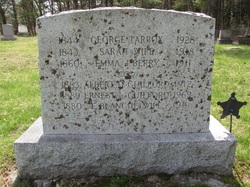 After his tour with the 27th Maine was complete, he enlisted into the 1st District of Columbia Cavalry, a private in Company M, on 10 Feb 1864. As this company was recruited and filled with Maine soldiers, it was transferred over to the 1st Maine Cavalry in August of 1864. During a battle at Sycamore Church on 16 Sept, George and over a hundred others were captured by the rebel forces. He was imprisoned for 6 months [where over half of his captured reg't would die], but survived to see the end of the war and was mustered out in August 1865 [see the History of the 1st Maine Cavalry 1861-65 by Edward P Tobie c1887]

For most of his life, George worked in the sawmills, a 'sawyer', in Buxton and in Old Orchard. He moved to the latter community after the 1880 Buxton census and before the 1886 OOB street directory was compiled. He lived on Ross Road.

George and Sarah did not have any children together*.


additional source data:
* By Sarah's first marriage she had one child, daughter Emma J Moore, who was born in Biddeford (or Hollis) in 1860 and died on 5 Mar 1911 in Old Orchard, aged 50 yrs, 5 mos, 23 das. She had married first to Edwin Smith and secondly to Charles Berry. By Smith she had Edna Blanche, who married 1st Albert D Guilford (17 Oct, 1901) and after his death in 1912, she married his brother Ernest Lester (26 Aug,1913). They are all buried in the Tarbox plot in Dunstan Cem, Scarboro. This explains the Guilford's living with Tarbox in 1910+1920, his step-granddaughter and her husbands.