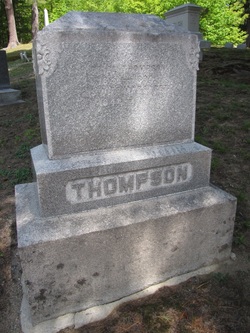 He married, date not yet known, to MARGARET. She was born in Ohio abt Feb 1844 [1900 census], and died some time after the 1920 census (death record not yet looked up). She is buried with her husband in Oakdale Cemetery. Considering she was born in Ohio, she may be the MAGGIE MORGAN who married an Adrial Thompson on 7 Sept 1872 in Milan, Erie, Ohio [OH, County Marr Rec].

Adrial was a shoe maker, working in Sanford most of his life. He may have gone west for a short time, as there was a Maine-born Adrial Thompson in Chesterfield, New York during the 1870 census, working in a cotton mill. He is possibly the same man who was in Ohio in 1872 (see marriage above), but was back in Sanford by the 1880 census.

During the Civil War, he followed up his service in the 27th Maine (his brother George W had also enlisted in this unit) by reenlisting with the 32nd Maine Infantry. He was mustered in on 5 Apr 1864 as a sergeant in Company F. When the decimated regiment was consolidated with the 31st Maine in Dec '64, he was mustered out with other officers.

It is not known if Adrial and Margaret had any children, but none were seen living with them in census records.