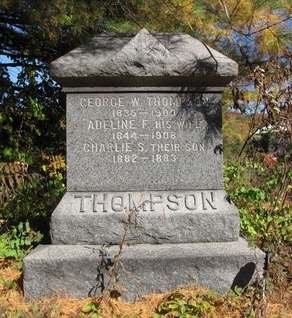 GEORGE WASHINGTON THOMPSON was born in Sanford, Maine [Descriptive Roll; death rec] about Feb 1835 [1900 census], the son of Adrial and Hannah (Hazeltine) Thompson. He died on 5 Mar 1909 in Sanford [ME vr], aged 73 yrs, 4 mos, 10 das from La Grippe and exhaustion, and was buried in the Thompson family cemetery with his parents [YCCI, pg 1732].

George and his brother Adrial Jr were both shoe workers in Sanford when they enlisted with the 27th Maine Volunteers for nine months. George went on to be a farmer, owning a place on High Street in Sanford.

He and Adeline had seven children:

V. FREEMAN BURTON THOMPSON, b. 21 Dec 1876 [WWI Draft Card]. He married EVELINE. He married 2nd, on 9 Jan 1907 in Portsmouth, NH, to ROSAMOND G QUINT. She was born in Sanford, ME, the daughter of Charles and Maria (Burroughs) Quint. By 1910, they were living in Los Angeles, where he worked as an electrician for the Pacific Electric Railroad. He and Rosa had a daughter:
1. Marjorie A, b. in ME.